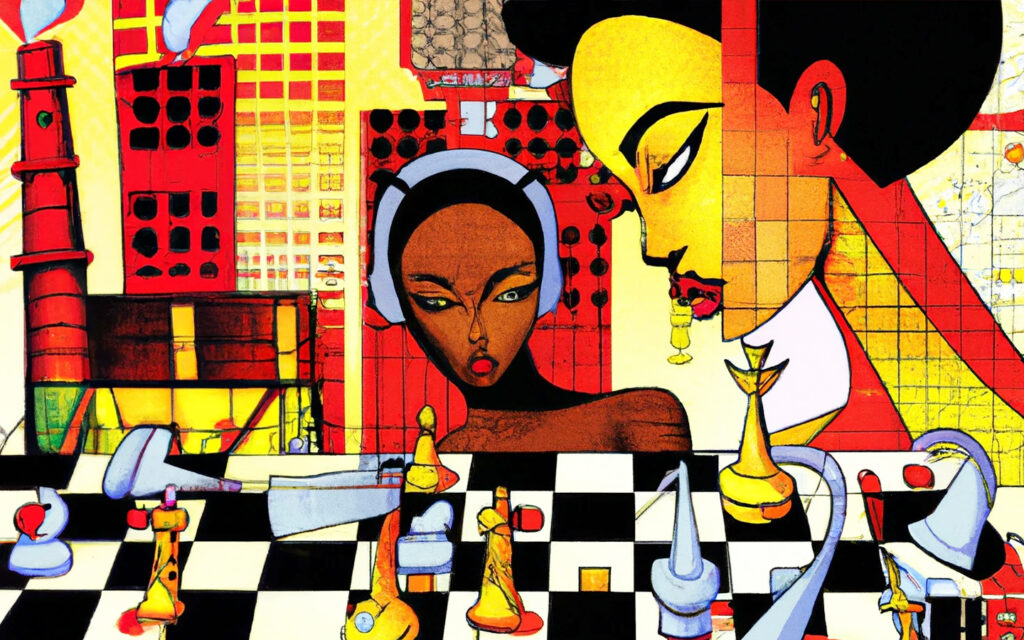 DALL-E is one of the world’s most talked-about AI-powered programs – and Hyphen designers are already using it to create some memorable pieces.

The image-generation service is a prime example of machine learning and the power of artificial intelligence. Currently only available to a vetted group of testers, our very own Patrick Savolainen and Yujin Chiang have both been given access to this technology with incredible results.

Our recent article on serverless computing is just one example of where we have used DALL-E to create something unique in a very short space of time. Here, Yujin explains how it operates, how he approaches using it and how it can help Hyphen and other organisations to get creative (Images shown in this article are all produced by DALL-E and retouched by our design team).

First off, DALL-E has gained a lot of attention because of its use of AI but how does it work?

Yujin: DALL-E can generate new images based on a short text prompt from a user and can combine completely unrelated objects in all sorts of ways. The program can also modify existing images, create variations of the images it generates, and interpolate between two inputted images.

There is so much interest and research, from both experts and enthusiasts, into this program right now because this technology could really change the way we approach design in some respects. 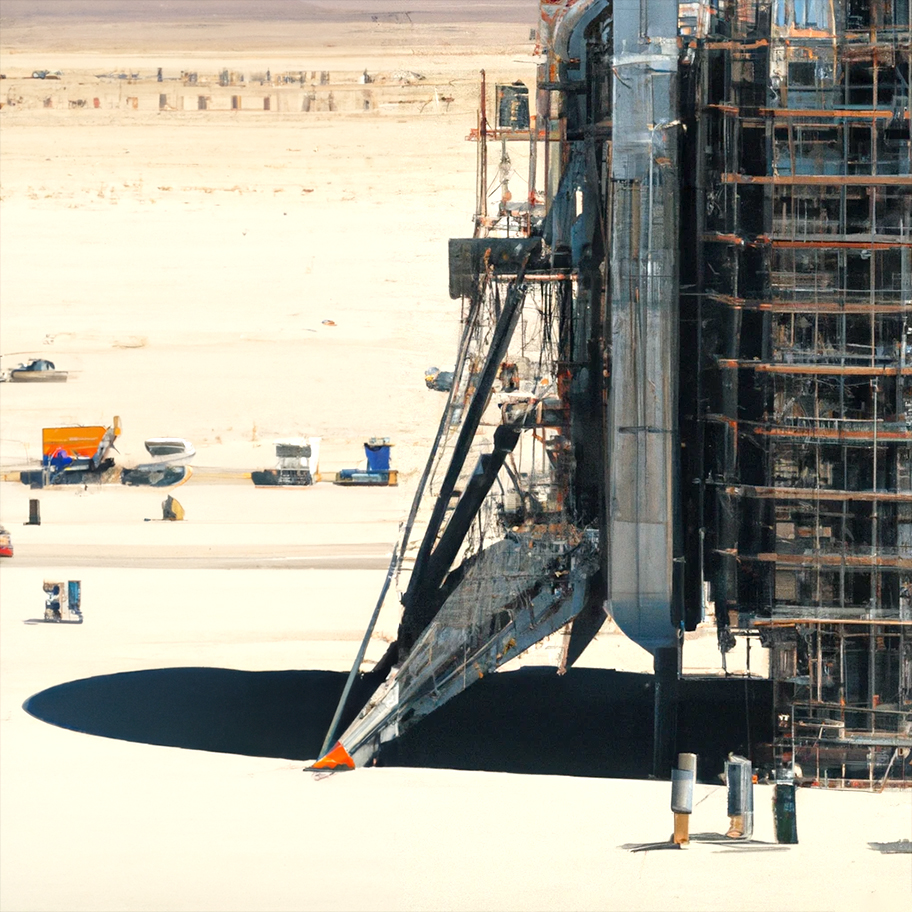 Above: A group of rocket-scientists building a huge chromatic spaceship in the middle of the desert.

How easy is it to use? Is it really as simple as just typing a string of text and getting a digitally generated image instantly?

Yujin: It is very easy to work with DALL-E. All you need is a creative and adventurous mind and a computer that can connect you to the internet. You can just keep imagining, typing and playing with it until you get what you want but you really need to think about what it is that you are looking to make to get the most of it.

DALL-E has already produced artwork for at least one Hyphen article and will almost certainly be used for more in the future. How does having this tool available change the way you approach the creative process?

Yujin: On one hand, I think DALL-E definitely enriches and enhances the initial phase of image creation. In just a few minutes, I can see some DALL-E-generated ideas and assess which, if any, are suitable for what I want to achieve. That being said, the image won’t always be perfect, and you definitely need to polish the image before publishing it.

It does, however, feel like you have a loyal and like-minded assistant to work aside with and it speeds things up to some extent, both of which are very useful during the creative process. 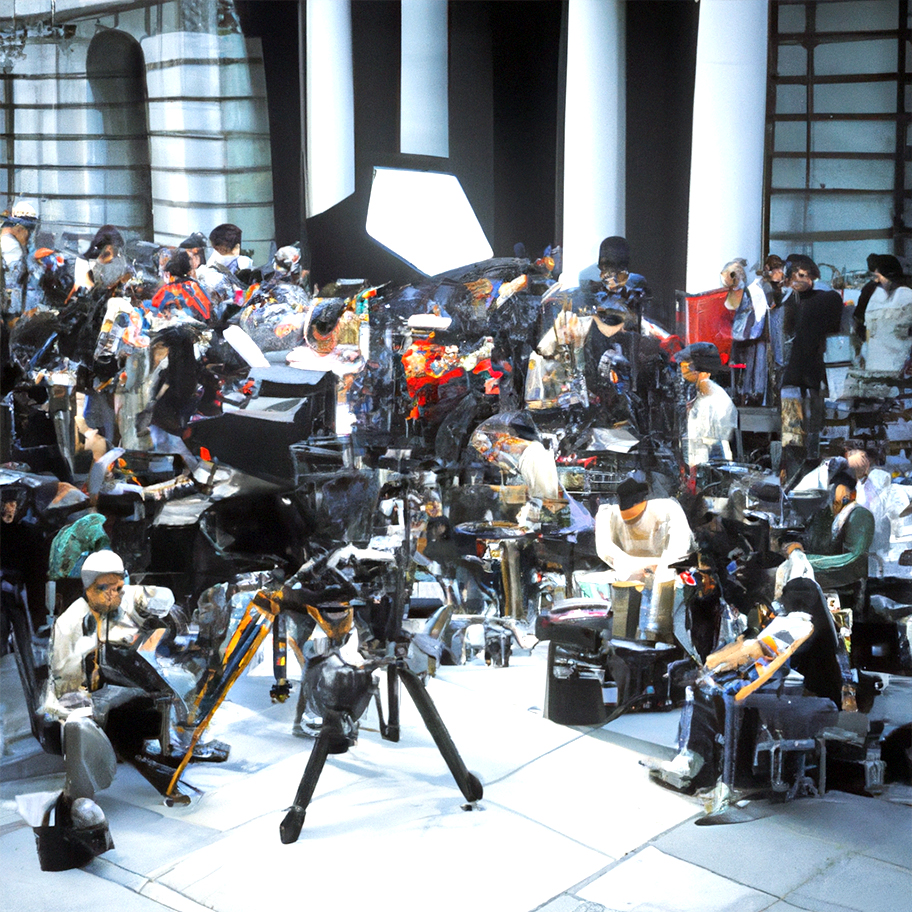 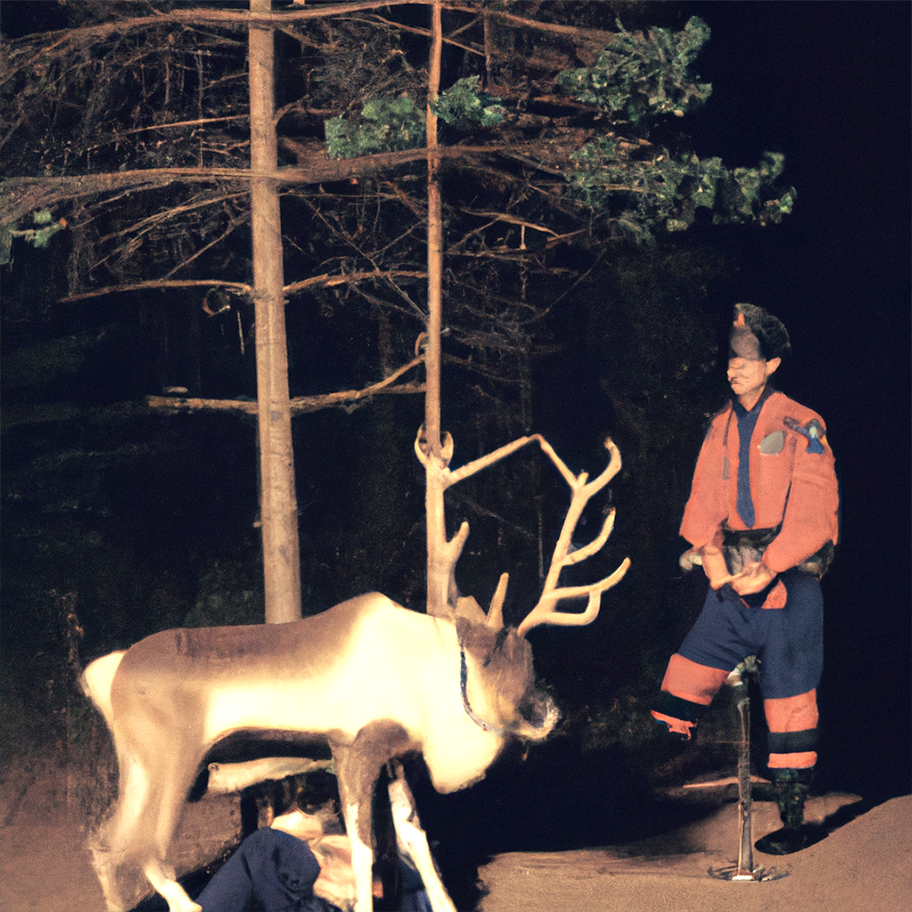 Left: A photograph of a group of moviemakers shooting a Hollywood movie. Right: A reindeer gets arrested by the Finnish border police for trafficking three full moons.

Automation is one of the key things Hyphen is looking to do as part of the company’s efforts to be as efficient as possible but how important is the human element in using DALL-E?

Yujin: I think it would be fair to say that DALL-E is only as useful as the person providing it with input. The program is very efficient when it comes to generating drafts for creative minds to review but the results are not perfect yet. Who uses it and how it is used are still very relevant.

From Hyphen’s perspective, it actually is quite helpful in that by having this, I can design things quicker, which allows me to work on other tasks that provide greater value to the company, and it does take out some of the more tedious tasks for me! 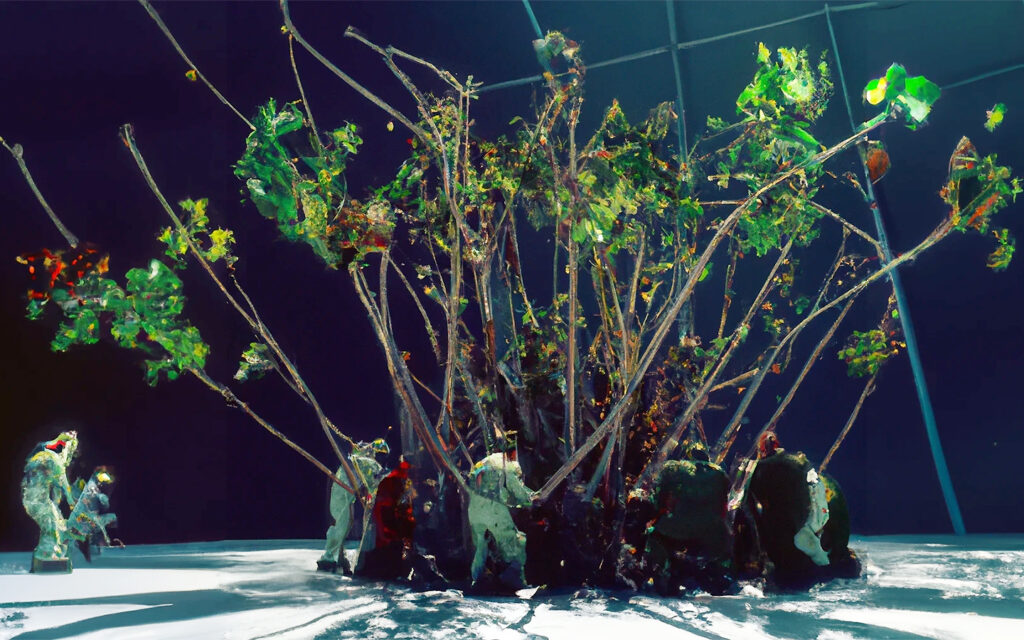 Prompt text for DALL-E: A photograph by Wim Wenders depicting a group of people growing trees in a space station.

How has having access to this changed the nature of the work you do for Hyphen? (For example, has it made designing things quicker? Have you been able to test out more experimental designs?)

Yujin: I can test and produce images quicker so it does help me to be more productive – but I have also indulged myself a bit when using this new technology to create some interesting images!

Of the things you have produced with DALL-E, which is your favourite?

Yujin: There is one trick that I really like it comes to feeding prompts into DALL-E: you can specify an artist or their style (for example, van Gogh, Chagall or Impressionism) that you would like it to draw and the program does it. This is really cool and interesting as it gives you the opportunity to get a peek at how an artist from the past would take on a contemporary subject. 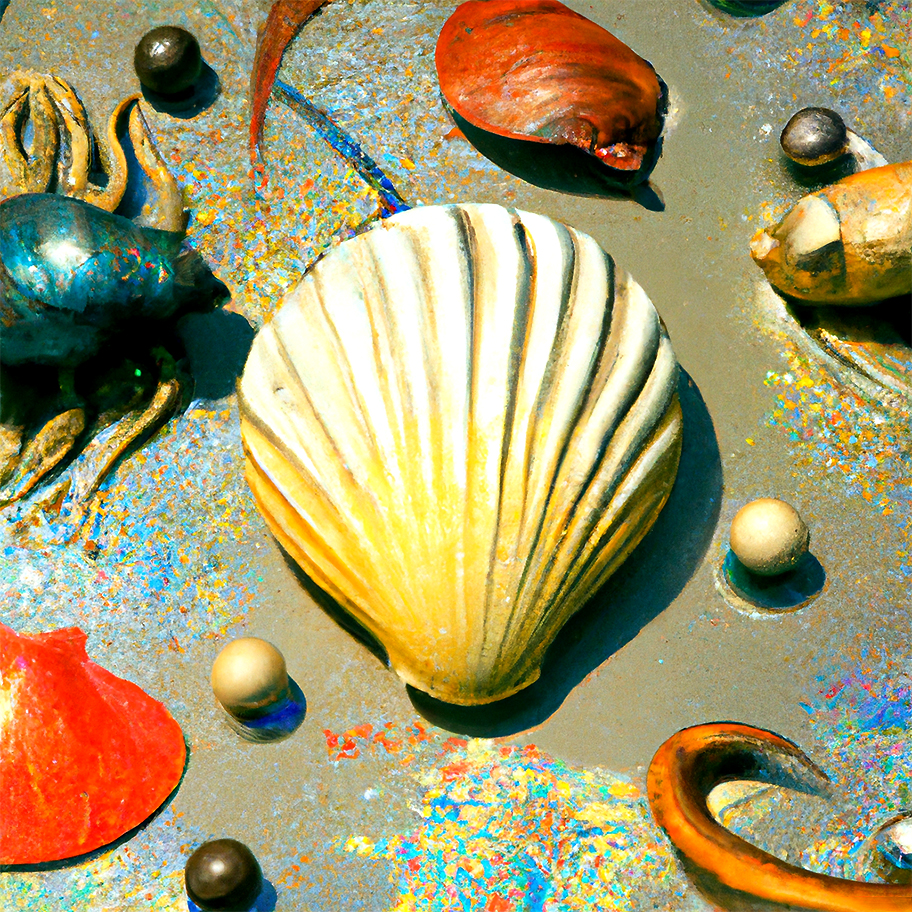 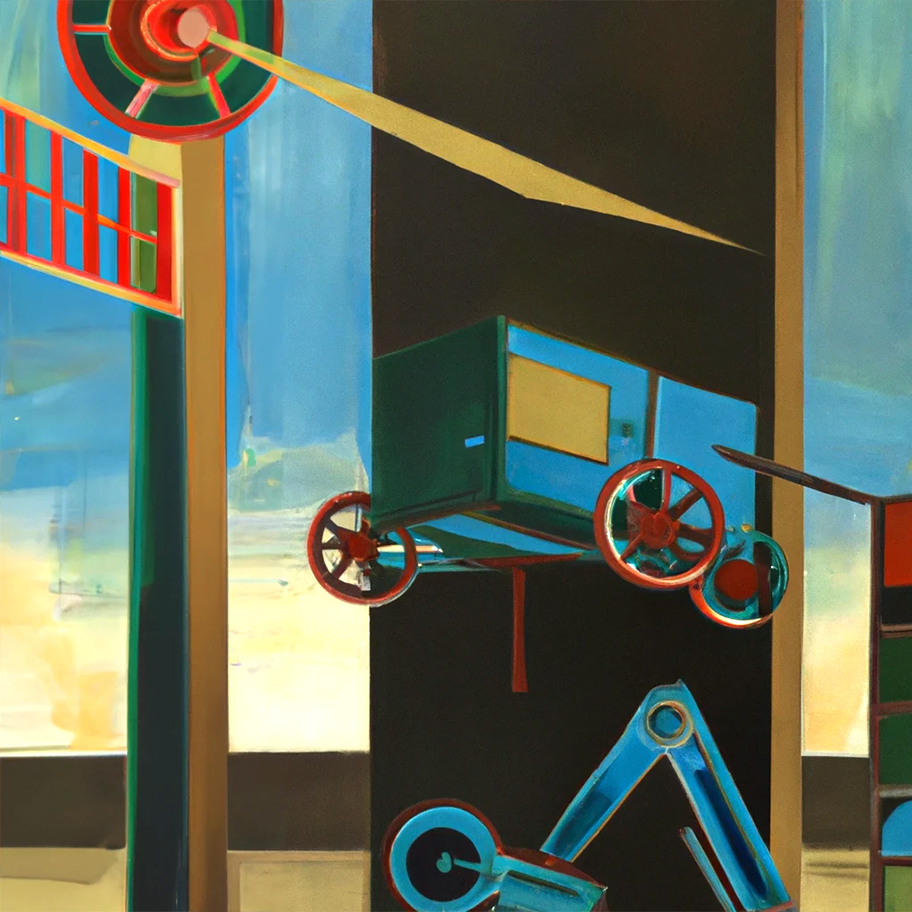 Left: Second nature, an installation by Damian Hirst. Right: An oil painting by El Lissitzky depicting machines building a car in a factory.